The dates of grading are approximately November 10 (Master Funakoshi’s birthday) and April 26 (in commemoration of his death). Upcoming kyu tests are:

There is no charge for grading or for advancing in rank, but membership in Shotokan Karate of America is required.

Candidates for grading bow in 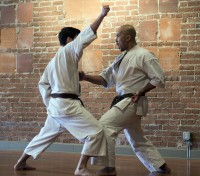 Please be clean, well groomed, fingernails and toenails closely trimmed, dressed in clean gi in good condition and ready to go at least 15 minutes prior to the scheduled start time of kyu test. Usually there is a brief but intense practice prior to kyu test — do your best! The examination itself will consist of three parts; kihon (basic techniques), kata (forms), and kumite (sparring).

Twice each year in SKA, students are graded according to their proficiency, perseverance, attitude, and dedication. The dates of grading are approximately November 10 (Master Funakoshi’s birthday) and April 26 (in commemoration of his death). The student requests this evaluation from his senior, and the senior in turn will do his best to evaluate the student strictly and honestly.

There are no hard and fast rules which dictate how long a student must practice before achieving any particular rank. With perseverance, acceptable attitude, and steady improvement, a dedicated student might be ready to receive the rank of brown belt (3rd kyu) after about one year, and black belt (1st degree) after about three years.

The student must demonstrate a working knowledge of the three phases of training: basics (kihon), forms (kata), and sparring (kumite). A student’s rank should never be cause for disparagement by others or self deprecation any more than it should be cause for inordinate pride. The ideal evaluation should embrace the student’s total gain in technique and self-mastery.

Students who want to be graded should practice each basic technique and kata at least five times each day outside of regular class for two weeks prior to grading, except it is advisable to keep the last day prior to examination free for relaxation.

In the first part of the kyu test, the student will be required to demonstrate approximately 10 repetitions of each basic technique (five in one direction, turn, and five back). The basic techniques are:

During the second part of the kyu test, the student will be required to demonstrate at least two kata; one kata which the student must select (favorite kata), and one or more kata which the senior conducting the test will select (required kata). It is strongly recommended that students select one of the Heian kata as their favorite through Shodan testing (1st degree black belt).

The senior will select the kata (required kata) which he believes reflects the student’s best attainable rank on the day of testing. Candidates for 8th through 4th kyu (white belt candidates) will be asked to perform one of the Heian kata:

Candidates for 3rd through 1st kyu (brown belt) will be asked to perform one of the Tekki Kata:

When called to perform kata, the student should move quickly to a position in front of the senior conducting the test and should allow adequate space to the front and sides to complete each kata. With a clear mind and a big feeling, the student demonstrates courtesy (rei) and waits in a ready stance for the senior to give the name of the kata to be performed.

Usually the required kata is announced by the senior who will issue commands to the student(s):

The best students perform kata smoothly and precisely, without unnecessary tension in the body, in a very alert and focused frame of mind, in exact stance and posture, with attention to dynamics of speed, application of power, expansion and contraction , mindful of the meaning or practical application of the kata.

Students will be asked to demonstrate two types of pre-arranged sparring during kyu test:

If you are lucky, a senior may offer some constructive criticism based on observation during testing.  Take such criticism to heart — NEVER argue or offer any explanation, excuse, or dissent.  Assistance is offered for your benefit, not your comment. Say, “Thank you.”