“My brother, John, came back from Korea, and he practiced martial arts over there. I always looked up to him -strong, agile, athletic and everything else. I wanted to be like him. I was always interested in watching martial arts films, and the Bruce Lee films kind of inspired me. In 1973, when I was thirteen, a friend of mine who was in high school told me about a karate instructor who was, like, ‘world ranked.’ Three of us were having a slumber party, and I decided to call the instructor. So I called Mr. Beltram up and told him I was a student at Meadow Brook Junior High School and had heard about his karate class and wanted to find out about it. He said, ‘Well good, come by. We’re having class tomorrow night and you can watch.’ So the three of us went to the first class. We sat down in seiza, and we thought it was kind of silly and started laughing. Mr. Beltram told us to ‘Be quiet!’ and from that point on we were pretty serious. My friends quit after a few months, but I liked it so much I just kept going.” 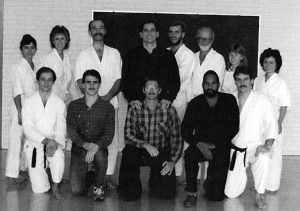 “When I was a white belt in the beginning with Jon Beltram, he would go around and demonstrate his one inch punch on people to show that power and strength were not needed. He’d already been explaining to me all the time that I was much too tense all the time and that I needed to relax. So I was trying to figure out this whole thing with breathing and relaxation. Anyway, Jon comes up and positions himself with his knuckles right in my solar plexus, and I’m thinking to myself, ‘OK, just relax.’ As he begins to punch, I totally relax and breathe in. Big mistake. Big, big mistake. About a week later, I went to the doctor and had to take some medication for a small hernia. So I found out the trick was not to relax all over, especially when Jon is demonstrating on you.”

“I started practice so many years ago, and I just always felt I would improve. You’d think that after all this time I’d have a clearer idea of what karate meant to me. It just seems to have been a part of me for all these years. It has always been a goal, to improve. Maybe I was a little more selfish in the beginning, that I wanted to improve myself Now I feel more that I want to pass along what I’m learning, and watch others achieve, and mostly have the same opportunity to seek a goal. It’s self-improvement, physical and mental. I have never been brilliant in things I do, but I always felt I had persistence. So the long term study fitted in very well with my personality. I persisted in school and persisted in my practice, or hoped to. And being both a mental and physical practice, it fills some gaps that pure academic existence doesn’t.” 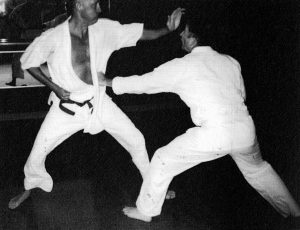 “Since the AT&T dojo began in February, 1994, my participation has been almost entirely at that dojo. One thing that stands out is the change that has taken place in the two of us who have practiced from the beginning. I can only guess what humorous thoughts must go through the minds of those twenty year olds at special training to see me, a slight fifty-six year old, out there trying to keep up with the others who all seem younger, bigger, and more athletic.

“I am surprised at how much more my legs will stretch now. When we began, sitting slowly with our feet spread wide apart meant putting my hands behind me and catching myself as I fell. Today, my hands can stay in front, and I can almost go down correctly.

“In Tom Peacher, our dojo’s only brown belt, the change is subtle, but clear. Although he has not become loud or aggressive, he now stands, walks, and moves with a confidence that was not there before. It is a joy to see his success.11 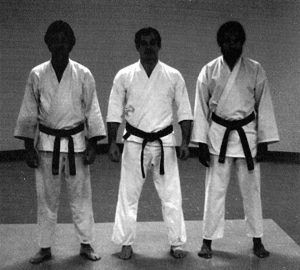 “We used to have some crazy trainings when I started in 1974. I remember a couple of classes we did 3,000 punches. We used to do a 3 -3 1/2 hour workout. We did ippon, sanbon, and jiyu-kumite every class and we would rotate so everybody fought everybody. Our kumite alone used to last 45 minutes to an hour. It was a lot more intense then. It’s intense now but I think it’s more mental than physical. Back then it was more physical, because everyone was younger and crazy. I think classes are much healthier now as far as the wear and tear on our bodies. Back then it was a lot crazier. The control is much better now -that’s for sure. We were always getting busted and ripped back then. 11