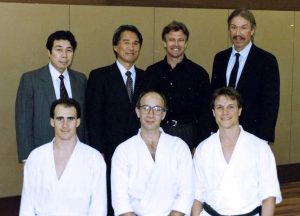 “The first time I met Mr. Ohshima was when I tested for shodan. He had this glow about him when I first met him. He walked in, had a suit on, just had that aura. Still does have that about him. There’s no doubt in my mind that he’s a true master. I’ve met a lot of high level people; they’re not on the same pedestal he is, no way. When he touches you it just goes right through you. Did he ever give you a punch before? Well, nobody else can do that. I mean it goes completely through you. When he does a reverse punch, the feeling goes completely through you. He’s the only one who does that to me. 11

“Ohara was a very quiet, amiable man. To give you an idea, sometimes he and his friend, Sadaharu Honda, would just sit together in a room and say nothing. When Ohara was vice-captain of Waseda’s karate club, Honda was captain. They made a pact at the time that they would always practice. Ohara used to like to just go for drives, for instance, where Mr. Okabe was quite different, less patient.

“Ohara had a reputation for being strong, but some of the techniques which had worked for Ohara in Japan just wouldn’t work when he came to the U.S. because the Americans were so much larger than the Japanese. And he was suspicious, because some of the people practicing at that time on the West Coast were really pretty rough people, and he didn’t trust them too much. Jon probably fell into that category, too, so it could be that Ohara was pretty cautious around him.

“Ohara worked with us on basics, and actually he was forming some of his ideas from his recent practices with Mr. Ohshima in California. Because he came over not to visit either Kansas City or the University of Illinois, but to visit Mr. Ohshima. And it was Mr. Ohshima who then sent him about. Mr. Ohshima was beginning to have a strong influence then on the way Mr. Ohara did things. We were also doing some things we wouldn’t consider today, like rabbit hops and duck walks, because they are very hard on the knees. Even with Okabe, one of his practices used to be deep squats to rising front kicks. It was still a time where you might run across the floor with somebody on your shoulders. I think those might have come from the University practices which were so recent for both Ohara and Okabe. 11 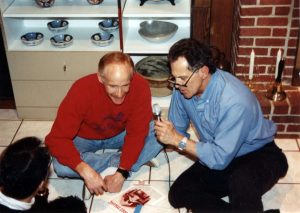 Andy Brown and Jon Beltram do their best with Karaoke

“Well, I had heard all sorts of things about Mr. Ohshima, but he seemed like he was just a good, honest, clean, strong character. He didn’t really do a lot of demonstrations. Just the way the he talked -very humble, very congenial -you could always feel just beneath that, a dangerous animal -you could feel that he was more than what he was showing you at the time. Part of that, I think, was the feelings of some of the other people there. There was a subtle tension in the air -even though he was real nice and all, there was something very strong, very untapped that could happen if he really wanted. So I couldn’t really tell -just that he was a nice interesting teacher, all good kinds of qualities, but not the real potential he showed later on as I got to know him.”

“We first met Mr. Ohshima on a visit to the University of Illinois. He made more than a couple of visits to the University of Illinois, usually traveling from one place to another across the country. It was very much like it is today. There was always very much a sense of awe. It was always a very uplifting experience for everybody who watched him. He did a little more than American politicians. Besides speaking, he could demonstrate. It always made quite an impression. He used to chide sometimes, ‘Oh, but you’ve seen that before.’ Always had the same effect on me, though. He’d get a little embarrassed that he repeated himself sometimes. But it didn’t seem to matter. In fact, it always meant a great deal.”

“Mr. Beltram used to like all of his students to challenge him in kumite. He used to be a wild man in kumite. He would find the best students to kumite, and I guess I was one of them. I was a white belt. I would get a little out of control and we would get into it. I would split his lip open and, of course, he would pay me back. He was younger, 34 or 35 years old, and still trying to show off his capability, but things would get out of control. Compared to then, he is very calm now, and a great teacher. Now he treats us like we are all seniors and we all have our different views, and he pretty much accepts that. He has become more humble.” 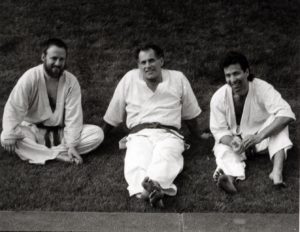 “Mr. Okabe had warned us before Jon’s first visit to Illinois not to hit Jon. I think he had acquired a reputation as a tough guy because he had come up at a time when they competed in tournaments. The early tournaments tended to have heavier contact than in later times. Jon had a reputation, but we never saw it. Jon’s behavior was always exemplary. He was very disciplined in the exchange practice competitions and the practices at the University of Illinois in the 1960’s. He never gave the impression of being an out of control fighter, or anything like that. He was just a fine gentleman. 11

“The thing that’s really kind of interesting about Jon Beltram, he does have -a sense, a grasp, almost like an instinct -for the many subtle aspects of karate. You know, he’ll talk about the feeling -that’s how he’ll express it ­but that’s a thing you can’t really teach so much, as far as saying ‘do this, and you’ll have this sense or feel.’ He always seems to have an intelligence for that, which I don’t see in other people, even people practicing for so many years. I mean a real sense, almost like a 6th sense. He’ll investigate something until he can kind of have a grasp of it. So he goes beyond the technique sometimes, and that’s kind of different and unique. So the man does have some depth to him -that’s kind of an interesting thing -he’s unique in that respect -he sticks with it so long. 11 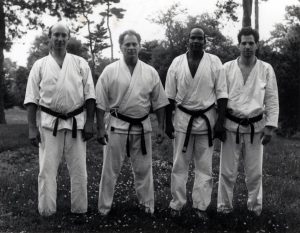 “I came to Kansas City in about 1975. And I practiced exclusively with Jon’s group. I was very happy to have an experienced senior leading my practices. That was the thing I looked forward to in coming to Kansas City other than the work with the Weather Service. You can get caught in a University club, become the senior member, and have a membership which changes with graduation. You get the very real feeling that you’re not progressing like you should, not to have the opportunity to work with seniors or learn from more experienced people, so I was very happy to come to Kansas City and get to practice with Jon. I still have the opportunity to learn from Jon, but nowadays I have the opportunity to practice with, and learn from, an incredible number of talented, experienced people. I just never thought I’d have that opportunity. There’s Donnie Duncan, Carl Johnson, Mike Lyon, David Altman, David Lightner, David Mills, Greg Barstow … so many!

“Donnie Duncan is just the perfect person! …Focused in what he wants to do. And in his practice, the biggest impression you get is of a real gentleman. Donnie genuinely likes people and treats them very well. He treats them with respect and is not one to show off his accomplishments. He just acts and practices, and you see what he is, and I think he’s just a perfect, perfect person. That’s the way one should be, ideally, in my estimate, so you’re just very, very fortunate to know Donnie.”

“The junior members today are really privileged. We have lots of seniors in this area they can practice with. Mr. Ohshima’s spirit, Jon’s spirit, all their spirits somehow are going through us and hopefully we’ll try to lead -to bring the juniors with us. We’re trying to help them to grasp all of the training and knowledge passed to us. Hopefully we represent it well for Mr. Ohshima, Jon, and all the seniors who have taught us all the way through the blood line. How lucky they are to have all these seniors teaching in this area. Not very many places have so many seniors who are so close knit. Even though we’ve gotten older and have our own lives now, somehow we still manage to get together now and then to practice. I hope the juniors can see that. We have to try to pass it on well, so that when they become seniors they can do the same thing.”