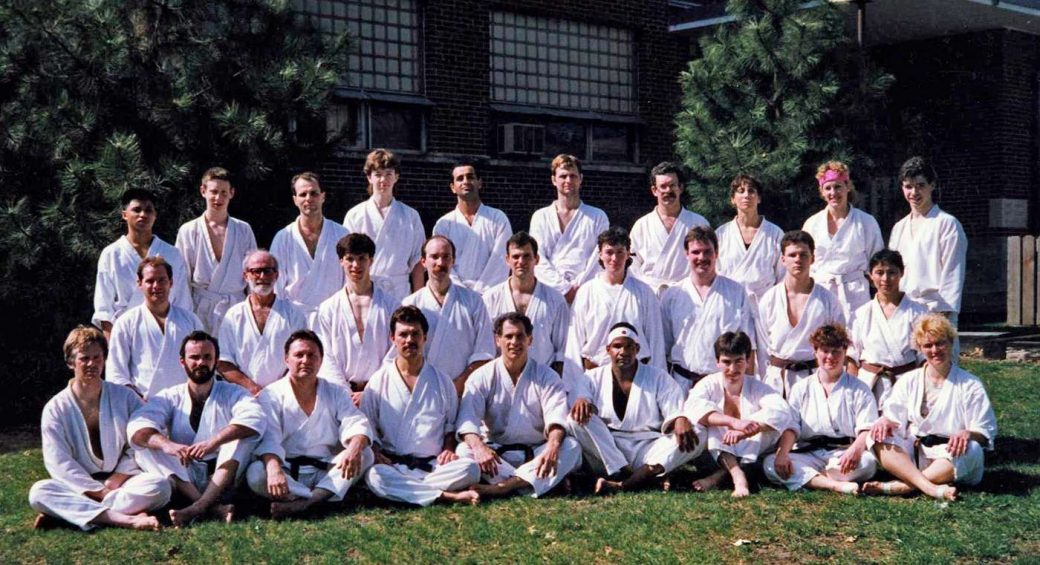 ”I’ll always remember Henry Wilkerson in Long Beach in 1974. Donnie Duncan and Dave Lightner and I arrived in LA. Caylor Adkins picked us up and took us to Henry Wilkerson’s Long Beach dojo. We slept on the floor for a couple days and practiced with Wilkerson. Henry started doing back fists and front punches on my stomach, and I was trying to prove to him I could take it, that kind of stuff. Clabe Hartley drove us up to the training in the mountains. I think we may have stayed with Clabe a night after the training, too. So, that was our first special training. It was probably 1974. I was fifteen then. Dave Lightner was sixteen. I was scared to death, heading up to the first special training in the mountains at Cate School in Carpenteria. I’d heard all these stories about the rocky road. We trained day and night. I was just a little white belt from Kansas City, and I raced against the black belts in the runs. It was just a good experience. It was hell. I don’t know. I was all excited. I loved to train. I was up there with my two buddies that I started karate with, and I loved it. We had a good time. We were kids. It was great. The way we trained at St. Anne’s in Kansas City with Jon Beltram, it was like special training was an extension of our normal classes. Jon had prepared us for anything.” 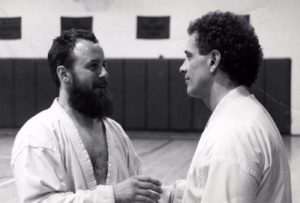 “My second special training was in the summer of 1986. It was by far the most memorable and affecting. Jon Beltram led, assisted by Mike Schuler and John Teramoto. Teramoto was extremely intense, and Schuler was just a maniac. I was ni­kyu, and I’d been running every day for three months to get ready. By the time June rolled around, I was running three miles a day and had completed one seven mile jog. These were the longest distances I’d ever made running.

“At 5:30 Thursday morning, we lined up for the first practice. Schuler led the run. He was fast, but I was determined to keep up, and did pretty well. I think we ran the better part of an hour that morning. I was right up near the front when we stopped and began jumping in place. I mean we jumped high, with Schuler shouting at us the whole time, until the last stragglers joined us, maybe thirty minutes later. I had never been so exhausted in my life, and practice hadn’t even begun!

“I was still wheezing and coughing when we finished stretching, and I was so exhausted from the run and tense from my anxiety about what was coming that I was unable to relax enough to stretch. I was reliving the distress I had felt during my first special training, and I couldn’t imagine how I could possibly complete the 1,300 basics practice we were about to do (plus twenty-five kata at the end, it turned out).

“So when we started, I lined up a little to the right of center in the middle of the group, in the most anonymous position I could find. We began with age-uke, and I was making small steps, standing straight up and moving my arms as little as possible in an effort to rest, catch my breath, and avoid practice.

”I’d marched up and down three or four times this way when ‘kaite’ was shouted, and I turned … and Michael Schuler was crouched in a super-low front stance and lunged at me with his famous oi-zuki screaming, ‘BLOCK!!!’ He hit me squarely in my right eye, probably a little harder than he’d intended, and cut my cheek, drawing a small trickle of blood. I thought that if I tried harder it would be an admission that I knew I had been taking it easy. I certainly wasn’t about to admit that! And I imagined Schuler would feel guilty about the cut. So, I continued my lackadaisical blocking and figured that after a while he would get the message and go away.

“Schuler must have screamed ‘BLOCK!!!’ and hit me in the face fifteen times before I figured out that he was never going to go away. We were up on the fourth floor of this gymnasium, and there was a big open window right behind him, and I started to figure the trajectory required to put him out the window. I made this absolutely TREMENDOUS block under his arm as he tried (unsuccessfully for the first time) to punch me again, and I did my best to launch him out the window. It jarred him a little, but he didn’t go flying. He did say, ‘Good! Keep it up!’ Then he moved on to the next victim.

“I was so angry and fired up that I forgot how exhausted I was, and I screamed through the entire practice, blocking and punching and kicking every time as hard as I could, spit flying from my mouth. I have never forgotten that feeling.

“I viewed all the leaders of that training as sadistic madmen. It took a long time for me to understand the tremendous favor Michael Schuler had done me by not allowing me to hide during that practice. It would have been so easy for him to just shrug and move on to a more receptive student. Schuler didn’t do that. He was just not willing to allow me to fail. He was going to do his best as a leader of special training, even if it killed me.”

“My first special training -it was like a madhouse -sick. I think it was the worst one I’ve been to. We ran five or six miles to and from each and every class -even kiba-dachi -even kick practices -you had to run to every class and back. That’s when Mr. Ohshima was leading them and there were a lot more people and they were a lot crazier. A lot of people lost the bottoms of their feet. That was bad. We had to do duck walks, all of that stuff. After we’d do all the basics we usually had to do twenty-five kata. Back then we did ippon kumite in one of the classes which we don’t do now.” 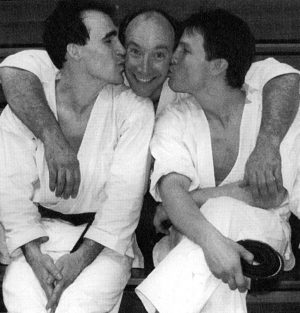 The completion of another special training

“Donnie Duncan and I were real close in 1976. I was at KU, and after school we would practice in the wrestling room. We were going to test the following November, but we started early, practicing together. We did a lot of ippon kumite, sanbon kumite, and practiced kata. The shodan test was a pretty special event. My parents were there along with Donnie’s parents, and Greg Barstow and David A. Mills were up for sandan, and Jon Beltram and Jim Kaplafka were testing for yodan that night. Donnie and I were very well prepared and our eyes were fixed on each other. Our spirit was high and we went through our kata, and Mr. Ohshima really didn’t give us much criticism. We did ippon kumite, and we were just together in our timing. We read each other very well. And when we got done, Mr. Ohshima said, ‘Best shodan test of 1976!’

“I remember that David Mills and Greg Barstow did not pass sandan, and I was in total amazement, because I thought they were brilliant in everything they did. I remember when they engaged in kumite, they were like animals. Barstow was a jaguar against David as a mongoose. Both of them were so quick. They had beards, and one exchange was so quick that when they clashed and separated, a piece of beard drifted gently down. It took an eternity to fall, but the moment it touched the ground, they went back at it again. But Mr. Ohshima did not pass them. I guess he saw that they weren’t ready for sandan, but they looked awfully good to me.

“Jon Beltram and Jim Kaplafka were amazing to see when they tested for yodan. Both were right on target. I gained a lot of respect for Jim that night, because he turned out to be a formidable opponent for Jon. I had really no concept of what yodan level was at that time, but Mr. Ohshima passed them both. Afterward, we all had dinner and a great time with Mr. Ohshima.”

“One year when I led summer special training, it was during the last minutes of black belt sanbon kumite, and Guy Richardson and Rod Porter were facing each other. They were just kind of floating and not working too hard. And I yelled at them to wake up and get going. And they heated up a little bit, but the next time I looked they were just taking it easy again. So I came after them just screaming, ‘IF YOU DIE, YOU DIE! BUT DO YOUR BEST!’ The whole practice stopped for a moment, and everyone was just standing there looking at me, kind of in shock. Then they went back to it, and much stronger.”

“In the area of special training, there used to be more running. Running to and from the practices, and pretty good distances. But the practices are by no means less determined today than they were years ago, and the practices we do today, with the variety and the high technical level, they are just much better than the practices I remember years ago. But remember, I wasn’t in California. The only real senior members then were in the California area, so I can’t speak about exactly what their technical level was at the time, but I think even they have matured and improved quite a bit over the years.”