It all started in 1978, after summer special training at Lexington, Missouri, with passing my nidan test. After the last practice, all the participants met for dinner at a local Lexington Chinese restaurant with Mr. Ohshima. Jon Beltram was excited about the test results, and Mr. Ohshima wanted to talk to me about starting a group. I was hesitant and nervous about this because I had never been given this level of responsibility before. Mr. Ohshima was very adamant about me doing this. He told me I must make a commitment toward starting a group, and now that I was a nidan, I could do this. There was nothing more to say because when Mr. Ohshima wants you to do something, it is difficult to decline, and you must make a serious effort to do what he asks.

Once I returned to the University of Kansas in Lawrence, Kansas for my Junior year, I sought ways of organizing a club. With the help of fellow KU students who practiced with Jon in Kansas City, I felt more comfortable taking on this endeavor. I could count on Larry Burmaster and Ken Kupperman to help me organize and recruit students and find a location in which to practice. Larry belonged to a fraternity and had some experience in organizing social activities, so this gave us a line on how to approach the University student activities committee for funding. Ken Kupperman was my good friend and roommate the prior year. He was ni-kyu at the time, and I felt I could count on his overall support.

The next step was to find a facility to hold practice. This was a difficult process because most of the areas or rooms designed for this type of activity were already reserved by other groups. Construction of a new wing in Robinson Gymnasium was planned for that year. As result, some space would eventually open for us the following school year. But in the meantime, we settled for the concourse of Allen Field House, an 18,000 seat facility which was the home of the Kansas Jayhawker basketball program. Allen Field House was one of the more famous basketball arenas in the country, noted for its noise level and capacity crowds. The concourses were long and narrow, allowing space for many techniques to be practiced, and with the field house’s awesome hollowness, kiais echoed throughout as if there were hundreds practicing. 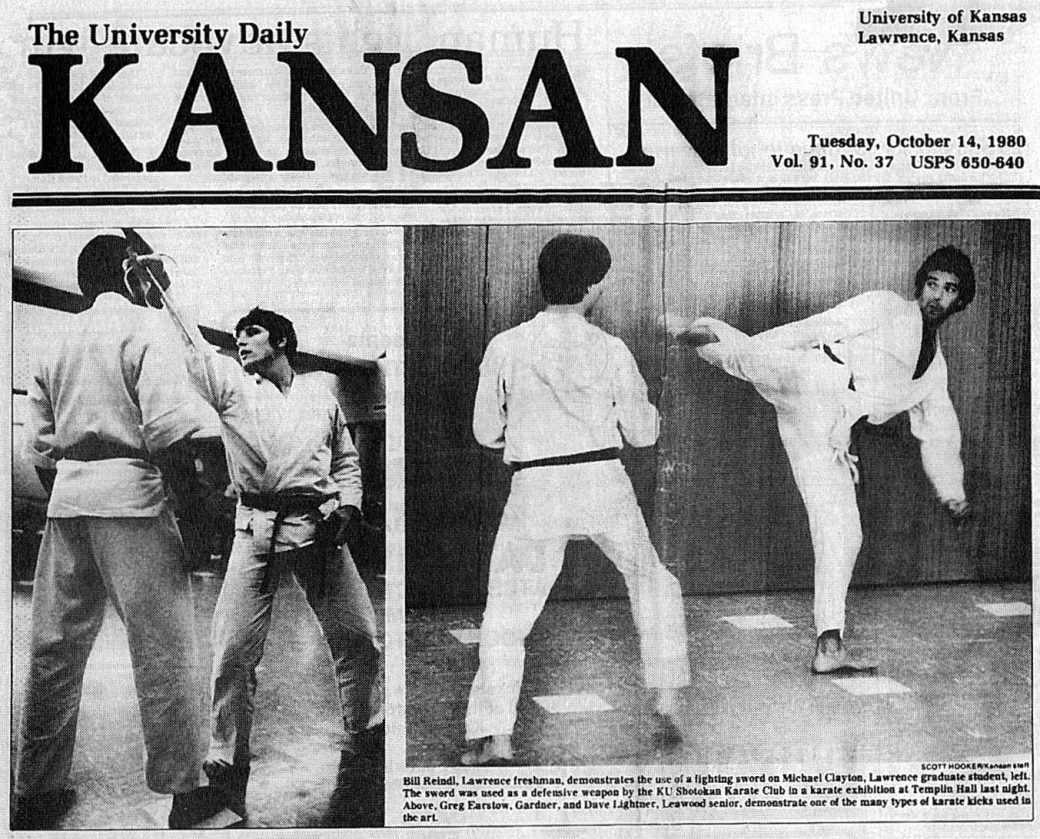 In order to recruit new students, Larry, Ken, and I posted flyers which we modified from the ones that Jon Beltram had designed for his dojo. This led to a steady flow of students who would practice briefly and leave, as well as students who would become dedicated and lifelong practitioners. We would average between six and twelve students a class, which would always result in a good strong practice. After three months training, we developed a good group of regulars, with some new students who were practicing for the first time and others who had practiced with various other clubs on campus. KU had quite a few martial arts groups including Tae­Kwon-Do, Goju-Ryu, Aikido, Judo, and another club that was popular, The Vanguard Karate Club. This club was known for its kumite. We were fortunate to have Michael Clayton, Vanguard’s leading student, join us. He was talented and full of good spirit. The students who practiced with us one or two semesters enjoyed the dedication and discipline, and others would go as far as attending special training and meeting Mr. Ohshima.

Another student who joined our group was Bill Reindl. Bill was ikkyu in Okinawan Goju-ryu and was very proficient in weaponry. He also became a very dedicated practitioner with excellent flexibility. Bill went on to receive his shodan from Mr. Ohshima and continues to practice on his own these days in Lawrence. Another student who showed great promise and enthusiasm was Jim Akagi. I recently had a phone conversation with Jim, and I learned he is a veteran agent of the Drug Enforcement Agency in the Dominican Republic where he councils drug offenders. Jim told me he still remembers the intensity of our class and the focus on every technique practiced many times. When Jim went to special training one year, Mr. Ohshima’s frequent demand that students “Tighten your mind!” made a big impression on him. He uses that phrase himself when he councils his students.

Jim hopes someday soon to find an SKA group to practice with in the Dominican Republic.

Once, we were invited to give a demonstration at McCullum Hall, one of the dormitories on campus. Greg Barstow and I demonstrated kumite, Bill Reindl and Michael Clayton demonstrated weaponry, and the rest of the group performed kata. We were very well received, with a few new members joining the group. Another demonstration was given later on the following year to dedicate the opening of the new wing of Robinson Gymnasium. Jon Beltram came and made overwhelming demonstrations of board and brick breaking techniques. Focus and power were one of his more awesome examples. All in all, the demonstration was a big success and led to more students joining the club. And with the new facility, another room was available for our use. We found this room to be much more accommodating, with its wooden floor and broader space in which to practice. Two-hour practices were held two nights a week throughout the school year.