Longview Shotokan originated in the physical education program at Longview -,1 Community College in 1970. David L. Mills, at the time a brown belt student of Jon Beltram, started the class in a small room that served as a gym. At the time, Longview was the only college in the Midwest with a college accredited karate class. When the first semester program ended, Jon’s brown belt student, Guy Richardson, continued as the instructor. Guy eventually became a nidan, and was a wonderful instructor who has been deeply missed since his death in 1989. John Bixby, Rick Lagud, Patty Richardson, Kim Rightmire, Alan Hoffman, and David A. Mills are all black belts who began their practice at Longview.

In the fall of 1986, Jon Beltram took over leadership of the karate club with the help of Carl Johnson, Alan Hoffman, and John Bixby. Later, John Rogers and David A. Mills also led practices.

In 1989, John Kaczynski took over as manager of the dojo. Classes today are held in Longview Community College’s beautiful new Recreation Center. Currently the dojo is led by Donnie Duncan, who is assisted by Carl Johnson, John Kaczynski, John Bixby, and Eric Manuel. The group has been fortunate over these years to have so many excellent instructors.

Students can practice karate at Longview either as a for-credit or a non-credit activity. From time to time there have been over a hundred students practicing karate at Longview. In 1996, there are about forty students enrolled in karate classes which meet three times per week. 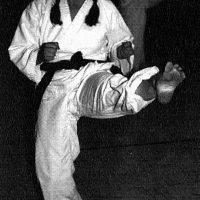 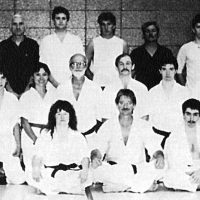 Patty and Guy Richardson and Alan Hoffmann at Longview, 1987 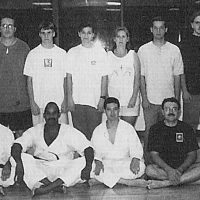