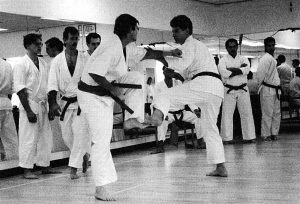 “During jiyu-kumite, after I had become shodan, I was fighting Michael Lyon. I was a black belt, but not too good at jiyu-kumite. Michael was much more talented, and I was just trying to get in and be strong, and I wasn’t doing too good a job, but I was sticking in there. And Michael comes through with this ferocious back fist strike right on my temple. And of course, it sounded like a lunch can had hit me in the side of my head. And I thought to myself, ‘My gosh! Everybody must have heard that! It was so loud!’ But nobody said a word, and I kept on fighting for a minute. Then Jon yelled, ‘Yame, yame! Half point to Greg Oliver!’ I was stunned. I hadn’t even thrown a single technique! And Jon looked over at Michael and asked him if he knew why he’d given me the point. Michael shook his head, ‘no.’ And Jon said, ‘Because, my God, Michael, he’s still standing!”‘ 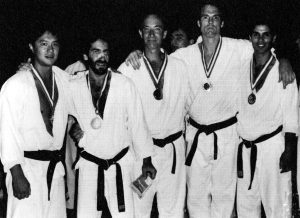 “I was a fifth kyu in 1985, and had been practicing maybe five months when Jon invited me to face him in jiyu-kumite. That was the first time. I’d seen him just obliterate the black belts, so I thought I was pretty well braced for what was coming. Jon came in with a front kick and front punch and never even touched me! So I hit him in the mouth hard enough to cut his lip. His eyes got kind of weird looking for a second, but he relaxed and did exactly the same thing again. And missed me again! I’d gained a lot of confidence after the first exchange, so this time I really let him have it! I hit him hard enough that both his top and bottom teeth came through his lips, and he couldn’t keep the blood from running down his chin. Wow! I was hot! Hey, this fighting stuff didn’t seem so tough after all. I just didn’t realize that Jon had controlled his technique, and that I’d hit him at least a full second after the exchange should have been over. And I really had no idea how huge the difference in our levels was. Anyway, this time Jon’s eyes stayed kind of scary looking. His pupils were like pinpoints, and he looked really, really mean. He began kicking and punching me. Pretty gently at first, but then harder. I was trying to avoid him, but since he was mostly hitting me with his elbows, I guess I wasn’t doing very well. I never was able to hit him again after those first two times, although I was trying. After a while, he smashed me in the temple for about the zillionth time with his elbow a little harder than before, and I felt pretty much out of body and was having a hard time keeping my balance. Jon called ‘yame’ and practice was over. That was the first time that Jon invited me for a coke and burger after practice. The two of us just sat there with our food cooling in front of us laughing ’til we cried because neither of us was able to use our mouth. It was a couple of days before mine would open comfortably, and Jon’s was leaking coke out his tooth holes. He kept telling me that I’d hit him hours after he’d hit and kicked me, but it was years before I understood.”

“The very first time I kumited, it was against a Senior at East. I was fifteen, and Mr. Beltram finally asked me to fight. He called ‘hajime,’ and I hit this kid with a back fist and broke his nose. I was shaking all over, and I tried to fix his nose, and he was crying. I couldn’t believe I had done that. I felt bad. Guy Richardson said that was one of the best back fists he’d ever seen.” 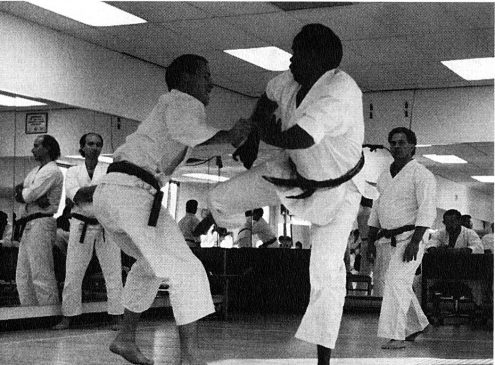 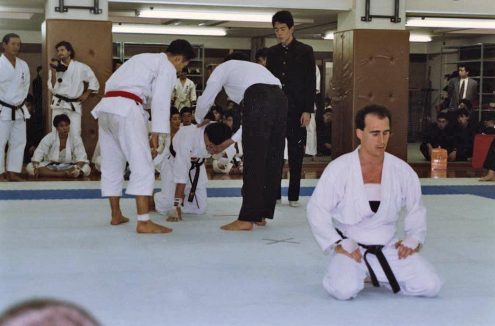