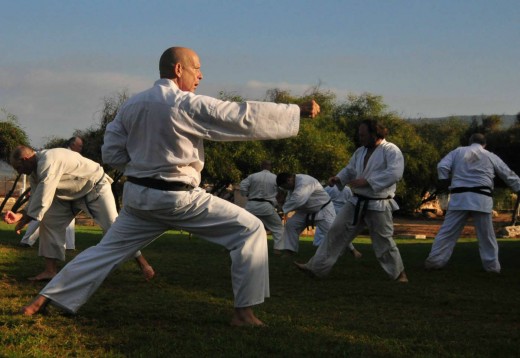 There are dozens of methods to teach and train kata. Each method contributes another new aspect to our understanding of the kata. In the following article I will try to discuss two elements: kumite and tempo/speed and the connections between them.

Kata, like everything else in karate, is first of all a combat. Ohshima Sensei has emphasized many times that “you must be convinced in the effectiveness of what you are performing; if you are not, don’t do it”. In other words, do not perform karate techniques just for the sake of the performance itself. We must investigate each movement in the kata until we reach complete understanding of its role and its effect on the opponent.

In a kata training session there is always the danger of entering into a routine, being carried away with the stream, executing the kata as an aerobic physical exercise. A marathon race, a hundred mile trek, or long distance swimming are all examples of physical activities that are hard to carry out, frequently harder to complete than our karate practices. The difference between karate training and these other physical activities is the continuous presence of opponents everywhere. We are not allowed to forget or ignore this presence, even for a blink.

In other activities we can “put our mind to sleep” every now and then. We can allow our body into some routine movement and let our thoughts fly elsewhere. A marathon athlete can imagine himself in a cool swimming pool if he feels hot and exhausted; an Army unit can sometimes sleepwalk straight into a field when its commander follows a curve in the trail; we karate-ka cannot afford to do so. Lose concentration for a split second and it’s all over – your opponent wins. Everything that will happen from this moment on is meaningless. You are dead!

The above attitude towards the kata is the only legitimate one. Kata and kumite are one. They are a combat for life!

A kata is not a complete coherent unit. Regarding the kata as such empties it from its real meaning and exposes us to the danger of loosing the feeling of an opponent’s presence. The kata is composed of ten opponents (20 in the advanced kata) with whom we have to fight in sequence. In a special training or in a multi-kata training session at the dojo I never execute 100 kata. I destroy 1,000 opponents!

If you regard the kata as a whole you will never be completely focused during a two-hour session. When I start such a session, I am starting a war against 1,000 opponents. If any one of my opponents prevails–catches me at a moment of inattention, or finds me performing my techniques automatically–that is my last opponent. Whatever follows is just a show, no one around will feel it but myself: deep inside, I know that it is over. I lost! I didn’t accomplish my mission.

A kumite against 1,000 opponents, in a Special Training, is the last thing a shodan or nidan candidate performs before the Dan test. This is the best preparation for the candidate and the best evaluation tool for his seniors to get an idea as to whom they are about to send to a Dan test.

One might get the idea that such an approach is very demanding, valid only for young strong trainees in good shape. As a matter of fact, the opposite is true. The above discussion is about the effectiveness of the fight and not about the power one uses. When you are young and strong you use your power. This is your most effective way to express yourself; it’s O.K., as long as you can demonstrate it 1,000 times repeatedly without a single failure. When you are older you are more experienced, your timing is better, your technique is more accurate, you use your breathing more effectively, and you use your body weight better. Yet, still, you have to face the same demand: execute your best 1,000 times in the most perfect way.

It doesn’t matter if you are young or old, weak or strong. There is only one measurement of kata training: the ability to execute time and again effective technique to destroy an opponent and to go on doing it as many times as opponents exist during that practice.

So far I have discussed the main goal: what am I supposed to feel and what to look for while practicing a kata.

My senior colleagues probably felt that feeling in special training and other multi-kata sessions. But how can we pass it to others? How can we make our juniors understand it and move forward faster then we did? Talks and written discussions, like this one, have a limited importance, if any. Everyone who can read understands, theoretically, all the above but how can we transfer it to a “body-like understanding”? How do we integrate it into our kata and the kata of our students?

In my humble opinion, the best point to start inheriting the combat feeling is by dealing with the kata speed and the rhythm of moving from one opponent to the next. Most of the students tend to work fast, too fast. The desire to destroy the opponent is wrongly translated into performing a very fast kata. We have to stop this tendency and emphasize two points:

Falling from one opponent to the next in a continuous rhythm is unacceptable. We expect the trainee (in the Heian kata) to perform in a correct rhythm, i.e., 10 explosions mean 10 opponents with 9 breaks of a second, even two, between each one, while waiting for the next opponent to attack.

Over the years as a karate instructor, I have found few methods and points to emphasize, very useful in implementing the “combat approach” and the right speed to the kata training.

All the above deals with the methodology of transmitting the right feeling to the students. The real goal now is to take this know-how to the battlefield, in our case, to the multi-opponent training session.

Following Ohshima Sensei’s advice, we do not practice those “crazy” 500 kata training sessions like we did in the past (12 hour kata practices). The common practice nowadays is 100-150 kata (1,000 – 1,500 opponents) per session. As a dojo leader, who has trained quite a few practices of this kind with my dojo members, I can attest that one can keep the right feeling with every opponent from beginning to end, but it takes an enormous effort to do it.

I recommend a gradual approach to put a trainee on the kata-kumite trail. First you can train against 200-300 opponents (20-30 kata) as a part of the routine kata training at the dojo. Then exercise it against 500 opponents, which takes around 60 minutes to complete. Finally, one can practice kata against 1,000-1,500 opponents; such a practice requires a dedicated session for this purpose only.

To reach full understanding of the kumite feeling during kata training, it is recommended (to juniors and seniors as well) to practice it first with the Heian kata or any other kata that you have performed tens of thousands of times. Only then you should implement it in an advanced kata, which might require more attention to the technique and will not let you put 100 percent into the kumite feeling.

The most important thing is to remind ourselves time and again: we are not talking statistics and percentages. We are training elements that determine life or death. Achieving 99 percent success means failure or death. If I destroyed 999 opponents and failed against one, I lost the battle.