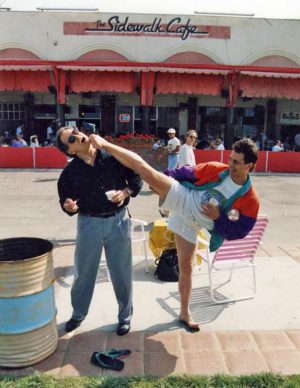 The University of Nebraska -Lincoln dojo traces its origins to a lot of road trips J!. by David Altman, his insistent friend, Mike Lyon, and some really good barbecue. In other words, there’s not just a beginning to our story, but a story to our beginning.

David Altman, the leader of the University of Nebraska -Lincoln dojo, was a sixteen year old high school sophomore when he began karate practice in February, 1977, under Jon Beltram in Kansas City. David had been trying to break the world rope-jumping record when he approached Jon and asked him whether karate would be a good cross training method. He really enjoyed being adopted by Jon’s group, and vividly remembers his first special training at the Wentworth Military Academy in Lexington, Missouri in 1977 at the age of seventeen. He thought his short life had come to an end when Jon started pumping him full of vinegar and honey and other weird stuff after the training.

By 1980, David had passed to shodan, graduated high school, and moved to Seattle, Washington to attend college. While there, he began to practice regularly with Ron Thom (currently SKA’s president). David spent the winters practicing with Ron Thom and the summers with Jon Beltram until 1988, when he returned to the Midwest to look for work. .. any work. Late the following year, David finally found a job as a ‘helper of people’ with the State of Nebraska and the University in Lincoln.

David found his job, helping severely disabled people learn how to accomplish useful work, very fulfilling, but since there was no local SKA dojo, he made the eight-hour round trip to Kansas City twice a month to practice with Jon Beltram and all his other karate friends (and to visit his girlfriend, Laura). David had also discovered an old friend from Seattle, Tom Parsons, at the gym at the University of Nebraska. Tom and David began to practice together along with Tom’s girlfriend, Tiana Litvak, and they frequently made the bimonthly pilgrimage to KC together. It was during one of these trips that the director of SKA’s central region, Mike Lyon, first suggested (and later repeated, and repeated, and got to be something of a pain in the ***) that David open his own dojo in Lincoln. At first, David didn’t take Mike’s suggestion too seriously. But, as the road trips “started putting a lot of wear and tear on my van and my body,” David reconsidered. Here’s how David remembers his first official step toward opening the Lincoln dojo:

“Ohshima sensei was visiting Kansas City in May of 1990. After practice, we treated him to some of KC’s finest Bar-B-Q at Arthur Bryant’s. It was then that Michael encouraged me (actually, he was giggling and physically pushing me) to ask Mr. Ohshima’s permission to open a new dojo in Lincoln. Michael really laid it on thick to Mr. Ohshima what a great teacher I’d be. Ohshima sensei said, ‘We don’t have a dojo in Lincoln. Where are you going to teach?’ I explained to him that I had been talking with the University of Nebraska recreation center about teaching karate, and they were receptive to the idea. Ohshima sensei said, ‘I give you my permission. Write Don DePree a letter saying I gave you permission to open a dojo in Lincoln, Nebraska.’ So that’s really when it started. For some reason, I didn’t get the dojo officially under way until 1994.”

In the summer of 1994, David began teaching non-credit courses at the University, and then credit courses. Enrollment slowly climbed from about ten students to our current twenty-five. From these classes, the dojo has a core of about ten who are SKA members and participate in various association activities, like kyu grading and special training. Among David’s most memorable moments in building the Lincoln dojo is having his first three students attend their very first special training in the spring of 1995. He felt like a proud father. He was even happier when they returned three more times within the next year. 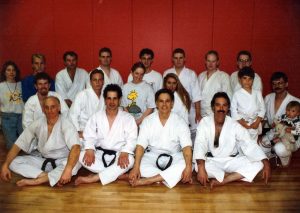 The UNL dojo has had several exchange practices and visits from seniors in the area. We were so lucky that our first ever outside visitor was godan Jon Teramoto of Lawrence, Kansas in early 1995. He was terrific. Then, after our trek to Kansas City for the March special training, yodan Jon Beltram, sandan Greg Barstow, and nidans Andy Brown and Greg Oliver visited in April of 1995. Then, in April of 1996, yodan Jim Kaplafka, sandans Carl Johnson and Mike Lyon, shodan Eric Manuel, and some of Mike’s juniors drove up to practice and enjoy a barbecue at David’s house afterward.

These events have helped the Lincoln dojo retain especially strong ties to Kansas City, where its members also take kyu tests and attend spring special training and other events. In class, David continues to emphasize our roots and those senior members who have really laid the foundation for our practice.

“I am very proud to have been raised as a young karate-ka by Jon Beltram,” David has said. “I am also very honored to be one of Mr. Ohshima’s black belts and to be a part of such a strong martial arts organization.” At the Lincoln dojo, we are very conscious of how much we owe to our teachers past as well as present. David’s high standards make the future bright for Shotokan in Lincoln, and the story of our dojo continues to be told through David’s patient and high quality instruction.