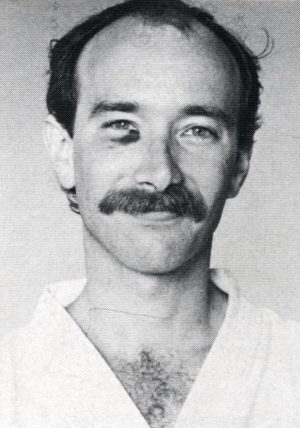 In the summer of 1987, I passed Mr. Ohshima’s shodan exam and went home . with a black eye, a broken nose, and a tremendous smile on my face. Almost a year later, Mr. Ohshima visited us in Kansas City. During that visit, he told me that I should begin teaching karate and that I should form my own group. I’d only been practicing about three years, and I tried to talk him out of it. But Mr. Ohshima was very firm. He told me that it was my responsibility to teach, and that I should keep my eyes open and find a place to start a new dojo.

I received a call a few months later from the Kansas City Art Institute (the Kansas City dojo had a yellow pages ad which gave my home phone number for information). There had been some violent crime on campus, and they were looking for someone to teach self-defense. I said I could only teach karate, but that it included a self-defense aspect. In lieu of payment to me, the Art Institute agreed to pay the SKA dues for members who came to practice regularly.

So, in the fall of 1988, we formed the official KCAI Shotokan Karate Club. Practices were held twice a week for ninety minutes in the school cafeteria, the only indoor space available. We had to move all the tables and chairs and sweep up the considerable amount of crud left on the floor by the diners each night before we could practice. Afterward, everything had to be moved back. That first year a bunch of people joined and quit, but four stayed long enough to become SKA members. Greg Leedle, Pam Kleine, Guy Forsyth, and Eric Schimel. Eric and Guy wanted to be martial artists in Hollywood and spent a lot of their time in practice pretending to be Bruce Lee, making bird calls and breaking into the most theatrical ‘fights’ in the middle of kihon. They eventually lost interest and stopped coming. Greg, a 6’3″ Tae-Kwon-Do brown belt and his girlfriend, Pam, decided my ‘demonstrations’ were too rough and quit practicing in the late spring. I was the only one showing up for the last couple of practices, and the dojo became inactive the summer of 1989, the summer I passed to nidan. In September 1990, I was returning home from a weekend of practices in Chicago with Dom Pizoli. On the plane, I was seated next to an Art Institute student and her boyfriend. Catherine Trzbinski found out during our conversation that I practiced and asked me if I’d be willing to teach karate at the Art Institute. She said they really needed it and would set it up. I told her that if she could put together a group of twenty students who wanted to practice, I’d teach. I gave her my phone number and figured I’d never hear from her again. A week or so later, she called to set up a first meeting. There were about twenty-five students at the meeting; dates and times were agreed, and we were given the auditorium (a wonderful space!) for our practice.

More than thirty students showed up for those first practices. I asked Greg Oliver, then a brown belt, to assist me in teaching the large group. By the end of the semester, there were still eight or ten practicing, and many continued long enough to attend special trainings, kyu tests, and other SKA functions. 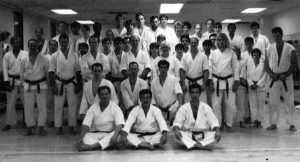 Tammy Gray was one of those who started in the fall of 1990. She had very poor coordination at first. Tammy practiced almost four years, rarely was absent, and worked hard. She became not only very well coordinated, but also a pretty tenacious fighter and a strong ik-kyu by the time she graduated from the Art Institute. I have never seen another student improve so dramatically.

Heather Cornelius and her friend, Becky Miller, also started in 1990. Becky was a ni-kyu from a different Shotokan style. She practiced regularly for three years and became a good friend, but she was never willing to risk kyu tests or special trainings. After graduation, she returned to Florida where she was awarded shodan by her original instructor. She is currently Professor and Chair of Art & Art History at Drury University. 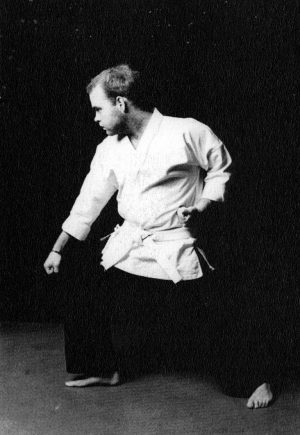 Heather had played high school basketball. She used to say, “Hey, if you think I’m big, you should see my little sister!” A wonderful person and strong fighter, she attended the 1991 Chicago fall tournament and placed second in white belt jiyu-kumite among a dozen men. The following spring she was taking kyu test, and Jon Beltram asked her to perform Heian Sandan. She knew all the kata through Bassai at the time, but for some reason she went blank and told Jon she, “didn’t know that one … ” Jon turned around to me with an expression which clearly said, “You mean you’ve been teaching this woman for two years and you still haven’t taught her Heian Sandan !!??” I looked Jon straight in the eye and said, “I never saw her before in my life.” Greg turned beet red and almost laughed out loud. Somehow, Heather passed fourth kyu by 1993 before she graduated and moved to Chicago.

In the fall of 1993, most of the ‘senior’ students were back along with a handful of promising new freshmen including Craig Thurber. Craig was the only one who decided to go to special training, and he is the only one who still practices.

The core of the current club started in 1994 -Sarah Shults, James Perrin, Brad Fairhurst, and Val Barnett. Brad is seventh kyu and a nice guy. James and Sarah are spirited brown belts. All have been enthusiastic special training participants. Sarah and Val have taken advantage of important SKA events in the Midwest. They attended practices with Daniel Chemla in Chicago. Last May, Val practiced with North Carolina yodan, Larry Lazarus. Sarah recently practiced with Caylor Adkins and Sada Honda in Chicago.

Sarah is extremely well organized and has assumed the role, if not the title, of dojo manager. She has made sure we have practice space and time and has done most of the promotion of the group to the student body this year. Thanks to her efforts, a large group of freshmen signed up for karate in the fall, so we are looking forward to an active dojo through the end of the century.

Val Barnett had been practicing less than two and a half years when he made an exceptionally strong special training in June of 1996 and was invited to test for black belt. Godan Sadaharu Honda, president of SKA’s black belt council, conducted the clan test, assisted by four yodans. Val passed and became the first SKA shodan to be trained at the KCAI Shotokan Karate Club. We were all very proud.

Special thanks are due Pam Hoelzel, vice president in charge of student affairs at the Art Institute, and her assistant, Ellen Butler. They have been very supportive of karate practice and have always seen to it that we have a place and time to practice.