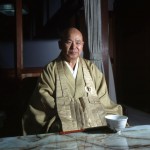 John Teramoto, president of SKA’s Black Belt Council, spent some years as Associate Professor of Art History at the University of Kansas and as Curator of Asian Art at the Spencer Museum of Art. During his tenure at K.U., Dr. Teramoto introduced members of KC Shotokan to the lectures and instruction of Fukushima Keido Roshi, Chief Abbot of the Tofukuji Zen Sect in Kyoto, Japan.

Keidô Fukushima (福島 慶道, March 1, 1933 – March 1, 2011) began visiting the United States and the Spencer Museum in 1989. There he has presented an annual calligraphy demonstration and lecture and has given instruction in Zen Sitting.

The following notes were written by Mike Lyon during March 5 and 6 Zen sitting instruction from Fukushima Keido Roshi, Chief Abbot of the Tofuku-ji Zen Buddhist Sect of Kyoto.  Roshi was assisted by Kei-san, his nephew and disciple.  The translator was Dr. Andrew T. Tsubaki, head instructor of Kankoukan Dojo, Kansas Ki Society.

Fukushima Roshi introduced students to Zazen (za=sit zen=Zen like seiza sei=quiet za=sit). Roshi talked a lot about life in the monastery. Roshi was speaking mostly Japanese, and he called the monastery “dojo”. Tsubaki Sensei, the translator, translated “dojo” into “monastery” (do=Way jo=place, in other words, a dojo is “a place where the Way is practiced.”

Fukushima Roshi instructed students to sit in one of the following positions (in order of preference):

(normally, Zazen is done on the wood floor. A folded blanket is placed on the floor for insulation and a flat cushion (~ 16″ square and 3″ thick) is placed on the blanket at the rear edge. You sit on the cushion with your knees on the floor. Because we were sitting in the Aikido dojo with plastic covered foam tatami floor, no blanket was required and the cushion was placed at the rear of the tatami. Tsubaki Sensei sat in seiza on a cushion on a carved wood seat between his ankles about 6″ in diameter and about 6″ high)

Most important is to keep the back straight, not sitting on the tailbone, but pulled up with “umph!” in the lower back, and shoulders relaxed and down. The the right hand (the active hand) with thumb held away from fingers is placed palm up low in the lap with little finger pressed against lower abdomen. Then the left hand (the quiet hand holds down the active hand and keeps it still) goes palm up on top of the right hand, fingers overlapping, thumb tips touching. The chin is pulled back slightly into the neck and the spine is kept straight. The eyes half closed, gaze at the floor about a yard in front.

Zazen began with three sharp claps of wooden sticks a few seconds apart followed by four strikes of the bell (the claps seemed complex and earthy — the bell clear, resonant and ethereal). Breathe in, breathe out, count “one”. Breathe in, breathe out, count “two”. After “ten”, begin with “one” again. When your mind wanders, resume counting breaths. The main thing is… when it becomes painful, do not move or adjust in any way. Just concentrate on breathing. In that way you begin to improve your will. Continue until the bell is struck again — that is “break”.

At 7am the following morning we first sat 30 minutes. Then we followed one another slowly in a long line of walking meditation (padding around the dojo taking small (ten inch ?) steps. Then we sat another 30 minutes.

One of the things Roshi talked about was “a monk’s daily schedule.” A monk wakes early and goes to bed late. In between there are light meals, sitting, begging, cleaning, and physical labor. All are important. Especially cleaning. A monk lives (eats and sleeps and sits) in the space of one tatami. Those green mats we have stacked up in the dojo are exactly the size of one tatami. Cleanliness is very important. Roshi says that the dojo is a reflection of the mind.

Notes I wrote during the Q&A following the “advanced” Zen sitting the morning of March 6th:

I hope you sit every day.

Q: How long does it take before sitting becomes comfortable?

A: For a lay person, two to three years. For a monk, about one year.

During the first week of December, just before the December training, I had a severe headache. So I felt I had to cure it immediately. There was a small hospital near the dojo and I went there. But it was Sunday, and the hospital was closed.

I saw that there was another, larger, hospital adjacent and it was open. So I went in and I told the nurse about my severe headache. She looked at me very strangely, but she called the doctor. The doctor came out wearing a yucata, so I thought that was because it was Sunday and he was relaxing. In the doctor’s office, he put his hand on my head to take my temperature. “No fever,” the doctor said, “Do you drink Sake?” I said, “No, I am a monk and I don’t like it.” The doctor checked my blood pressure and asked if I had problems with my blood pressure and I said, “No.” The doctor asked in what year was I born? I was born in 1933 which was the eighth year of Showa, so I answered simply, “Eighth year.” And the doctor said, “Taisho?” (which means that Roshi looked 14 years older to the doctor, early 30’s instead of late teens or early 20’s — must have looked really bad because of that headache!).

So the doctor had already made three mistakes. First, he thought I had a fever. Second, he thought I drank sake. Third, he thought I was much older than I actually was. So I said, joking, “You must be a bad doctor!” And the doctor said, “Well, you must not be a very good priest if you are pregnant, but I’ll give you some medicines anyway.” As I left the hospital, I noticed the sign in front, “Maternity Hospital.”

That was my last headache. I took the medicine and my headache was cured within an hour. After that, whenever I felt a headache coming, I just sit and that helps. Sitting is a comfortable part of life. If you can do good sitting, you can feel better.

In Zazen a straight back and regulated breathing might help you.

A: This is a typically American question. Just breathe and count. Breathe in and out and count ‘one’. This is the way a lay person should count. Just count as you breathe. Don’t worry about counting inhale or exhale. Don’t think too much. Thinking is not bad, but if you get stuck with it, it will hurt your sitting. So I emphasize to students: When you get tired, just sit in a chair quietly for five minutes. That helps to stop the thinking. Once you learn how to put yourself in that ‘not-thinking’ state, you can be healthier.

So sitting is important part of monk’s life.

Sitting is part of the process of emptying mind. I have 32 American disciples. The longest one has studied 18 years with me and he lives in Kyoto and he comes almost every night. So pretty soon he’ll complete koan study. He’s a layman, not a monk. He spent three months on some of the hard questions. That is a very long time. Because he is a layman, it takes him much longer.

Another American disciple stayed with us five years as a monk. Normally, as you study, the answers come easier to harder questions. The Master can’t teach good answers, the student must find out the good answer. But the teacher can advise. Usually I advise, “Don’t think too much!”

Q: What happens after you’re good at counting breaths? Does a Master still count breaths?

Q: Tell us about enlightenment or satori or whatever it is called. Has Kei-san (Roshi’s nephew and disciple who is assisting this trip) experienced enlightenment?

A: Normally, a monk will have satori at three, five, seven years, like that. You have to push through that opening door of enlightenment through repeated experience of satori.

So while you go through these 200 questions you will reach the first stage of enlightenment. I think nobody reaches satori before 30 years (or was that 3rd year???), so remaining 2,800 questions are to help you experience deeper. So your answer becomes more responsible and quicker. The first are known as “The hundred questions of Kido. When you finish koan study, your understanding is deep and your life is deep.

Study continues until death. There’s a saying that, “Buddha is still studying.” When you finish monastery, you begin what is called “special training.” To be a good master, you have to be a good person. So usually special training, the monk becomes a priest of a temple and comes into contact with many lay people, and learns compassion.

That evening, Roshi presented his lecture, “Zen and the Bridge” at the Spencer Museum of Art.