One of the problems with a college club is that membership changes completely every four years. So I was very happy to have the opportunity to start a new group at AT&T. I hoped the membership would stick around a little longer. John Kaczynski, manager of the Longview dojo was contacted by TLC fitness center. The center was looking for a karate teacher to lead daytime practices. I was asked to follow up and agreed to teach three days a week at lunch time. I would accept no payment but asked that anyone wishing to practice join SKA by the end of their first week.

There were about twenty-five people at the first practice in February 1994. This was a different group from the Art Institute. First, these guys were OLD. And they weren’t artists; they were mostly computer jockeys. But they worked hard, and they were enthusiastic. Of the twenty-five, about half joined SKA. A short month later, only one member, Rob Wright, attended special training. But by April, six or seven decided to brave kyu test. All became eighth kyu except Rob, who was seventh. Special training experience counts! 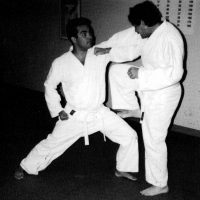 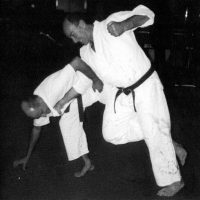 Greg Oliver, by then a very strong nidan, agreed again to devote one day a week to the AT&T group. His dedication, leadership, spirit, and knowledge are very much appreciated. He has been a major asset to the group.

Since our initial meeting, six or eight more members have joined, but there has been even more attrition. Though practices are only one hour long three days a week, they are pretty intense, and kumite is spirited. We practice in a carpeted space normally used for aerobics training. The fitness center is also equipped with stair machines, rowing machines, free weights, bicycles, treadmills and mirrors. A relatively plush practice space.

There are five active members of the AT&T dojo today. They are David Stuppy, seventh kyu, Tim Castilleja, sixth kyu, Sal Vivanco, sixth kyu, Rich Stohlmann, fourth kyu, and Tom Peacher, ni-kyu. These people are all very devoted and work hard in practice. Sal and Tim both have fantastic natural ability and will be exceptional karate men if they continue practice. Rich is SO-something, has absolutely huge fists and the body of a man thirty years his junior. He’s wild in kumite. David has made the most progress in the past year. He is really getting in shape and augments his practice at AT&T with regular practices at the Kansas City dojo along with his son, Mark. They had a wonderful time at Caylor Adkins’ practices in Chicago in August, 1996. Tom is turning into a wonderful senior and occasionally leads practices when Greg and I are absent. He is extremely athletic and a natural leader.

I am grateful for the opportunity to practice with all of these fine people. Jon Beltram says that if you really want to learn something, teach it. I must say, I believe he is right.