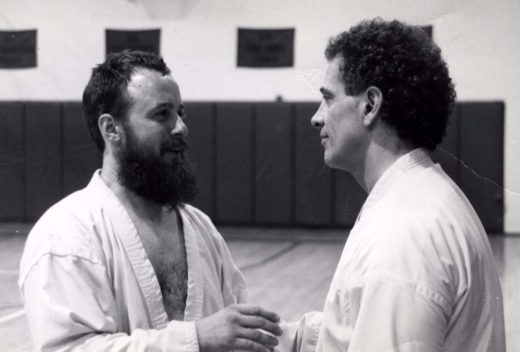 I didn’t start practicing karate to become a fighter. I started because I was interested in Zen and improving myself. The year was 1972, and back then there was no zendo in Champaign, Illinois, just David Carradine on the Kung Fu TV series. So when I first saw Karate-do at the University of Illinois club, it struck me as the most authentic and direct way I might get a taste of Zen. My first teachers were Marion Taylor and Jim Kaplafka. Both were experienced and dedicated karate-ka, so I thought it might take me as long as several months to absorb all they might have to teach me. Thankfully, they were both also extremely patient and kind — kind enough to put up with the arrogant little hippie I was then.

I first met Mr. Ohshima when he came to visit Champaign. My view of Karate-do, myself, and of what is possible to attain in this life changed radically. The warmth, sincerity, and intensity that emanated from this man struck me as something totally outside my immediate range of experience. Besides this psychological impression, the natural elegance and precision of his physical movements evoked at once images of both a primal animal and a sophisticated classical dancer, rather than another normal 20th century human. I knew I couldn’t grasp what moved me, but at the same time I knew the example before me was one that I wanted to follow.

The first time I met Jon Beltram was at a special training back in the days when Mr. Ohshima led them personally. Early on between practices I heard Jon tell the story of how he had once jumped into a cage with a muzzled and declawed bear in an attempt to find out if his yoko geri would work on such a wild creature. The innocent and unsuspecting bear let him know with amusement and mild prejudice that it would not: after absorbing Jon’s first several attempts with more curiosity than irritation, the bear’s instincts suddenly took over on Jon’s next (and last) one, as he sent Jon hurtling across the floor and into the cage wall with a single retaliatory swipe… which no doubt confirmed the bear’s confidence that his own uraken did work.

When I heard the story, I thought to myself that such cruelty to animals was something that neither of my two respected and sane direct teachers, nor Mr. Ohshima, (nor David Carradine’s character, Kane) would ever have engaged in. I quickly concluded that of the two creatures in the cage, the bear without the gi had surely been the more civilized and Zen-like.

It was during that first shared special training that I also got my first glimpse of Mr. Ohshima enjoying what seemed to be a favorite past-time: employing Jon as uke to demonstrate the efficacy of techniques based on breathing and hips versus a larger and seemingly far physically stronger opponent. My impression was that these early demonstrations posed somewhat of a philosophical, psychological, and technical conundrum for Jon, as Mr. Ohshima’s undeniable effectiveness clearly challenged what Jon thought he knew to be the source of his own undeniable strength (at least in comparison with most opponents other than the aforementioned one in the cage.) Over the years since, it has been with mild surprise and great admiration that I have watched the Kansas City “bear” evolve from his base of fighting instinct, natural athleticism, and physical strength into the truly polished character and mature martial artist that Mr. Ohshima’s prodding had aimed to create.

But as much as I have learned to admire Jon’s fighting ability, his humility to face his weaknesses honestly and with the determination to improve, and his fearless spirit, it is another aspect of this “bear” that has impressed me the most as the years have gone by: beneath all the machismo and good-spirited horseplay that had formed my initial less than glowing impression of him, Jon’s endless devotion to the art of Karate-do and his love for his juniors have always shone through as the most dominant element of his karate practice.

I think it is safe to say that everyone gathered here to celebrate this occasion could tell a personal story attesting to Jon’s kindness, concern, and support, especially in times of trouble. More than anything else, it is this embodiment of continuous care for others and leadership by example that I see reflected in his many respected senior students who have contributed so much to SKA over the years — Mike Lyon, David Altman, Donnie Duncan, Carl Johnson, Greg and Sarah Oliver, to name just a few — and in the lives and practices of all those who have joined in these first 50 years of the shared pursuit of Karate-do as a way of life in Kansas City.

so quickly, it seems,
our hair and belts turned grey,
while so slowly our eyes opened
to new worlds
with great joy we find ourselves
again and again at the Beginning
we thank Sensei by struggling
to wake juniors to the Way 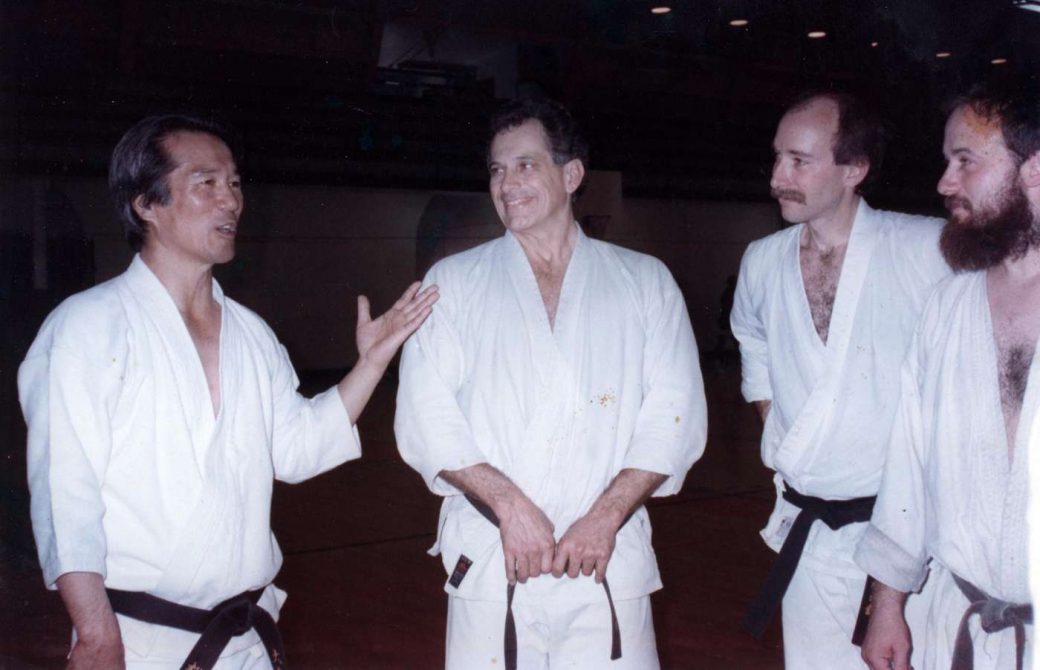