(Jon Beltram was interviewed by David Altman in 2016)

Q: How did you begin your practice?

I started practicing Yun Mu Kwan Taekwondo in 1959. By 1965 I had earned black belts in JKA Shotokan, Shorei Kempo, Judo, Aikido, and Japanese and Okinawan G?j?-ry?. I became the chief karate instructor of a commercial karate and judo school.

I was in California for a tournament when a friend took me to see the Southern California Karate Association Nisei Week Tournament where Ohshima Sensei made a demonstration. I’d never seen anyone like Mr. Ohshima and I was awestruck. 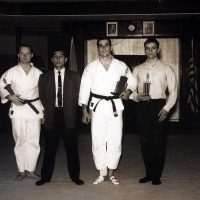 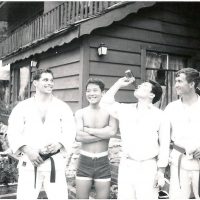 We invited Mr. Ohshima to Kansas City to teach us. He wasn’t able to come then, but he sent his junior, the late Mamoru Ohara. We’d had many visiting instructors in the past; Mikami, Mel Wise, Jang Yul Park, Gosei Yamaguchi, Shoichi Yamamoto, and Hidetaka Nishiyama to name only a few. Not one of them had the spirit and intensity of Mr. Ohara. In 1966 I joined SCKA (later renamed SKA) and I have never looked back. That was the beginning of the Kansas City Shotokan Karate Club.

I know so well that time and change are inevitable, but it just doesn’t seem possible that fifty years have passed so quickly. 88 of my juniors have become black belts. One is godan, three are yodan, seven are sandan, 29 are nidan, and 48 are shodan. I am so lucky to have been associated with each of them.

I have often expressed my belief that special training is the essence of our practice. It teaches us to do the things that must be done, when they must be done, whether we want to do them or not. To do our very best, no matter what our condition. To never, never ever give up.

I am proud to have been involved with SKA for the past fifty years. I am proud to have been a part of Mr. Ohshima’s vision to become stronger human beings, to improve society, and to lead the way to a better future. Our black belts will continue to transmit Shotokan Ohshima Karate-do in the Midwest and carry on Ohshima Sensei’s legacy.

Q: What made you stick to SKA practice instead of other martial arts?

Mr. Ohara was only teaching us for a short time and had to leave. By then I’d joined SCKA. Not long after, Mr. Ohshima sent Shoji Okabe to Kansas City to replace Mr. Ohara who’d moved away. Mr. Okabe remained to teach us quite a while. While Mr. Okabe was in Kansas City, Mr. Ohshima visited. Again, I was amazed by his tremendous ability, both mental and physical. That visit cemented my commitment to Mr. Ohshima and SCKA, which shortly after became SKA. 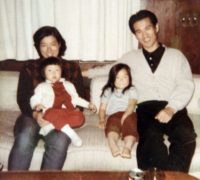 Q: What aspects of Ohshima Sensei’s teaching are most important to your lifelong practice?

The mentality of never giving up; Decisiveness; To always do your best; To benefit society; To be kind to your juniors; and To set a good example. These are the most important to me. 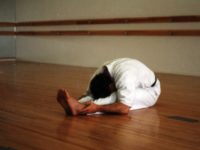 Q: Between your first and last special trainings, what insight did you gain?

In 1968, Mr. Shoji Okabe asked me to go to special training in California. It was the beginning of one of the greatest mind changing experiences of my life. 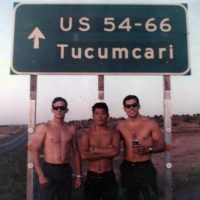 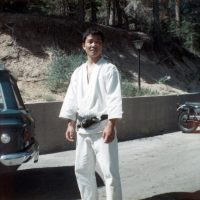 First and foremost, I believe that special training is one of the most important aspects of our practice. Special training allows us to face our mental and physical blocks and weaknesses and overcome them. I attended 55 special trainings, and each one made me see myself more clearly which allowed me to grow mentally and physically with each and every one.

Special training teaches us to gain control of the conscious mind and to realize the true strength of our unconscious. It allows us to gradually overcome the fear and doubt of our conscious view of our mental and physical weaknesses. Not only does it make us realize that we are much stronger than we think we are, but it builds a humble improvement of spirit and makes us realize that the real opponent we must overcome is ourselves. At first we feel we can’t push ourselves to face the agony of special training, but eventually we realize that everyone else is enduring the same hardship. Then we begin to push ourselves alongside them to increase our mental and physical awareness, and we realize that the only limits are the ones that the conscious mind burdens us with. At that point we reach beyond our conscious mind limits and find a kind of enlightenment of a new self. A self which is much stronger mentally as well as physically.

Special training has been one of the greatest experiences of my life and I hope that all of our juniors can experience this life changing gift from our seniors of the past.

Q: How has karate helped you overcome physical limitations?

I think special training gives us a mental toughness to overcome and face our daily problems and do what we have to do, when we have to, no matter what. The idea that we never truly lose until we give up or quit. So, in spite of physical problems, I simply refuse to surrender.

Q: Can you explain the importance of kihon, kata, and kumite? How are they related?

To me, kihon (fundamentals) is the foundation of renshu (continuous practice). Polishing, striving for perfection even while knowing it’s impossible to attain. Kata (forms) is moving meditation. In kata we hone mushin (no-mind), kokoro (mentality), kokyu (breathing), hyoshi (timing & rhythm), tai-sabaki (body shifting), and zanshin (remaining mind). Kata is, literally, a lifetime endeavor. Kumite (sparring) is where we learn to employ strategy in the movements of karate.

Q: How has karate affected your life on a personal level?

Karate has directed my whole life. It definitely gave me discipline and direction. At one point in my practice I was completely lost as to what vocation to pursue to provide for my family. I talked to Ohshima Sensei about this and he advised me to find something that would help society. I had always been involved in athletics, and I’d concentrated on science for my undergraduate degree. I decided to go back to school to obtain teaching credentials. I became a teacher, and teaching and coaching became my life. I taught science and coached football, basketball, and track in high school for the next twelve years. Afterwards, I decided to get a Master’s Degree in Education, and went on to earn a Doctorate in Educational Administration. It took many years to complete those degrees and throughout that period I continued to teach full time. When I completed my doctorate, I became interested in working with at-risk students. I developed an award-winning program I called “School Within a School”. For the next twenty years I devoted my life to working with at-risk youth. These were kids who didn’t have learning disabilities, but for some reason just could not succeed in a regular school setting. It was very satisfying work because I was able to give back to society and help so many young people discover their true ability, both in the school system and also in karate.

Q: How has your view of karate changed since you began practicing in 1959?

When I began to practice karate, all I wanted was to be the strongest fighter I could be. The physical aspects of karate were all that were important to me. To fear no one! To face anyone who challenged me. After I met Mr. Ohshima, I began to realize that the biggest enemy that I was facing was myself. There’s an old story about a wise old warrior explaining to his grandson that there are two wolves battling inside each of us; a good wolf and a bad wolf. The good wolf always tries to improve, to do his best, to help others. The bad wolf always looks out for himself, and wants to overcome everyone else. It never occurs to the bad wolf that he is the cause of all his problems. The grandson asks, “Who will win the battle between the good and bad wolves?” The grandfather replies, “The one you feed the most!”

I began to try to follow Mr. Ohshima’s advice. I tried to improve myself, to help others, and to make the world a better place. I hope I am no longer the same brash person who only thought of himself. Through the teaching and direction of Mr. Ohshima, I hope I have followed a better way.

The most important message I got from Mr. Ohshima in the beginning was, “We are much stronger than we think.” So, through special training we develop a mentality to never give up and to never let anything be a resistance to success. Throughout my life, special training has been a guide to me. I was once told that because of my dyslexia, I would never be able to obtain a master’s degree, much less a doctorate. But Mr. Ohshima’s constant repetition, “You can do anything that you want, you just have to put your mind to it,” and the special training mentality to ‘never give up,’ it took me five years to get my master’s degree, but I earned a 4.0 grade point average. When I began working on my doctorate, they told me they could not let me into the program because of a poor academic record during my first year as an undergraduate when I played football on scholarship. But I knew I could do it and convinced them to let me try. I went through my doctoral program, which took seven years. Again, I came through with a 4.0 straight-A average. I believe my academic success was entirely the outcome of my martial arts training. Mr. Ohshima once wrote that the goal of practice is to “someday ask my mind and find no shame.” I have tried to see myself clearly and to overcome the problems that hindered me earlier in my life. As Sensei says, “Look at yourself through demon’s eyes.”

Character is something that needs constant polishing. We are all human, we all have bad habits and we have to constantly push ourselves to eliminate our weak parts. We have to become better human beings. I have had two mentors in my life, my father and Mr. Ohshima. They both steered me well.